Take It From Florida: Yes, You Can Sell Condos Online Right Now

Many Americans have transitioned to working via Zoom, exercising via Zoom and having their dog meet with his psychologist via Zoom. Can you also sell real estate via Zoom? Experts in South Florida, where foreign buyers have long invested in condos over long-distance deals, say it can be done. They have a few tips.

From August 2018 to July 2019, $16B worth of real estate in Florida was purchased by foreign buyers, according to data from Florida Realtors. With so many based in Latin America, Turkey and China, agents have grown accustomed to virtual tours, FaceTime showings and digital offers.

“I can tell you that in the last eight days, we closed one based on a presentation virtually and we did another that’s coming out of recission in a few days,” Marisela Cotilla,  director of sales at the ALINA Boca Raton project, said Tuesday. “In the last 12 days, I’ve done six virtual presentations.”

It may help that Cotilla’s building is still under construction. She could do hard-hat tours for in-person buyers, but units won’t be finished for months, with closings scheduled for December. The timing is perfect for people who buy now to plan moves, she said.

Cotilla said marketers should be prepared to go from macro to micro, showing clients everything from the city, to the neighborhood, to the unit, down to cabinet and floor surfaces. Sellers should be fluent in different tech platforms, from slide presentations to FaceTime, and they should rehearse their presentations ahead of time.

“Some people think if they wait until after the storm, everything will be easier and prices will go down,” she said of prospective buyers. “I think the opposite will occur.”

Downtime is prompting people to consider big life changes and move up decisions that they had been putting off, she said.

“A lot of people will be coming to South Florida,” she said. “As that demand goes greater, prices increases. For people looking for bargains, today’s the day.”

“Right now, I am in the process of touring all the canals [in Fort Lauderdale] and recording those to upload to YouTube,” he said Tuesday. “I had a call today from a buyer in Ohio looking to buy waterfront. He wants to cover the groundwork now.”

Dotoli is using Matterport software that allows him to give a thorough 3D tour of a property.

So far, he hasn’t closed a deal that was 100% remote — a luxury buyer usually wants to at least walk the property, he said — but he predicts it could happen soon. 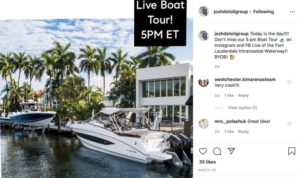 He did have one deal that was about to close. The coronavirus outbreak gave the buyer an opportunity to renegotiate a better deal, he said, so they waived an inspection period and will sign closing documents using a mobile notary who travels to them, or the online NotaryCam service.

Floridians are doing virtual property tours via boat during the coronavirus pandemic.

Alicia Cervera, who is in charge of sales at that Natiivo condo in downtown Miami, said that in the new development world, “We are used to selling sight unseen.”

She has put some properties under contract since coronavirus began. While presentations are gaining traction, Cervera acknowledged people often want to touch and feel what they’re buying.

“That’s why we make these beautiful sales centers,” she said.

On a recent day, her team did 70 presentations that reached 330 people total, she said.

“That doesn’t go without rewards,” she said. “Sales is a number game. It can translate to quite a lot of business.” 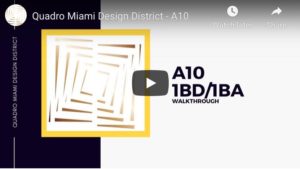 Quadro, a new condo tower in Miami’s Design District, was supposed to launch sales in March. The 12-story, 198-unit building by Alta Developers features one- and two-bedroom units that start at $400K.

The team from Fortune Development Sales canceled a planned sales launch event and pivoted to using videos, virtual tours and interactive floor plans to show off units to buyers. They are playing up low interest rates and Quadro’s short-term rental program that lets owners lease out their space when they’re not using it.

Alta CEO Raimundo Onetto said in a statement that the units were at “truly compelling price points” given the amenities — a pool and cabanas, yoga and spinning rooms and a “state-of-the art pet washing facility” — and the neighborhood.

The Design District is home to high-end shops like Fendi, Bvlgari, Cartier, Hermès and Balenciaga, where residents can easily walk outside and shop, just as soon as the stores reopen.